If you answered ‘water,’ then you’re clearly a Mensa member. 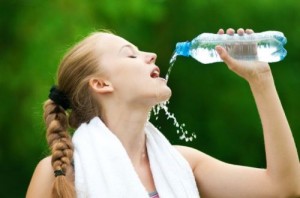 The human body is approximately 60% to 70% water (with a range of 45-75%) (1). It can be is less with increasing body fat because fat is known as “anhydrous” with about 10% water, however fat-free mass can be 70-80% water (1). An average 70-kg person has approximately 42 L of total body water, with a range of 31–51 L (1). Improper hydration will result in either dehydration or overhydration (hyponatremia). Daily water balance depends on the net difference between water gain and water loss.

Individuals are routinely at a risk of mild dehydration day to day (2). Public surveys (10,11) and experimental trials (12,13) indicate that the general public, and most importantly special populations such as children and older adults, are at a risk of voluntary dehydration (14,15). Even experienced athletes can underestimate their hydration status and may drink insufficient amounts of water resulting in sustained dehydration (16).

Sustained dehydration is associated with poor health (3,4) and increases the likelihood of kidney stones and urinary tract infection by a significant degree (3,5). Additionally, prolonged vasoconstriction due to chronic dehydration increase the risk of hypertension and stroke (6).

An emergent body of evidence also suggests water consumption (and the food we eat) affect mental and physical performance (7). Water is essential to the maintenance of normal physical and cognitive function (8), and there are some recommended intake guidelines of 2000 ml of fluids for females and 2500 ml for males per day (9). More specifically it is recommended 3.7 L for 70 kg males and 2.7 L for 57 kg females (29).

Water is the medium of circulatory function, biochemical reactions, metabolism, substrate transport across cellular membranes, temperature regulation, and numerous other physiological processes (28). The loss or increase in fluids and electrolytes (potassium, sodium, calcium, magnesium…) affects cellular performance, and can cause cell death, and even death of the entire organism.

Assessing hydration status – Individuals should monitor their own hydration levels using markers such as urine color (27). Although dilution methods to determine total body water via plasma osmolality measurement are the most accurate, valid, and sensitive ways, they are not practical for most situations (30,122), but total body mass and urine color when used in conjunction is a good way to assess hydration status (30,122).

First-morning urine should look like pale yellow (27), indicating the normal and expected presence of some waste products from metabolism overnight. This color corresponds to a state of euhydration (34,35). I shouldn´t look at water, or anything dark.

Thirst is initially perceived when a body weight deficit of 1–2% exists (36,37), fluid consumption should be adequate to avert the perception of thirst. Thirst signals any imbalances of the osmolality of fluids and tissues (the electrolyte concentration), and the total amount of water in our body (volume).

Dehydration – Dehydration is characterized by weight loss, confusion, dry skin that is hot to the touch, and possibly an elevated core body temperature. In a hot climate, dehydration can be dangerous and result in thermal injury. Other causes of dehydration can be excess diarrhea, vomiting due to GI dysfunction, kidney disease, and diuretic medications. 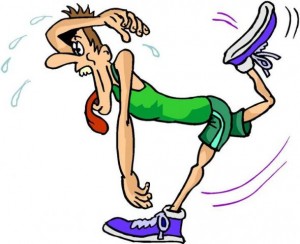 Thirst may be a poor measure of hydration because of the lag between the physiological dehydration and the thirst signal. Special populations require more attention, elderly are less sensitive to the thirst mechanism the deterioration of osmoreceptor sensitivity in older adults (30,38,39,40,121); and children are inexperienced in interpreting the thirst response (41,42). Older adults are also at higher risk for reduced kidney filtration function, which results in less efficient water conservation (when dehydrated), further exacerbating difficulties in recognizing a dehydrated state (43).

When the body is in a state of dehydration, many substrates and neurotransmitters are influenced by circulating vasopressin (antidiuretic hormone) and angiotensin II (44,45).  Dehydration can increase levels of cortisol (46). Interestingly, even a decrease in cell volume caused by hypohydration promotes insulin resistance (47,48,49).

Conditions dehydrating insulin target tissues such as hyperosmolarity or amino acid deprivation are associated with insulin resistance; blockage of the cell volume response to insulin may be the common denominator in dehydration-induced insulin resistance (47).

As a consequence of dehydration, the blood–brain barrier permeability is altered by serotonergic and dopaminergic systems, potentially causing central nervous system dysfunction if dehydration is prolonged (50).  Chronic dehydration influence inhibitory and excitatory activities of the brain by increasing aminobutyric acid and glutamate levels (51), by stimulating γ-aminobutyric acid and N-methyl-D-aspartate receptors, to synthesize and release antidiuretic hormone (56).

Hypohydration stimulates the catabolic hormones by increasing core temperature (69,70) and increases cardiovascular demand due to decreased plasma volume (71,72,73). A 3% to 4% loss of body weight (water) reduces strength by about 2% and power by about 3% (35). 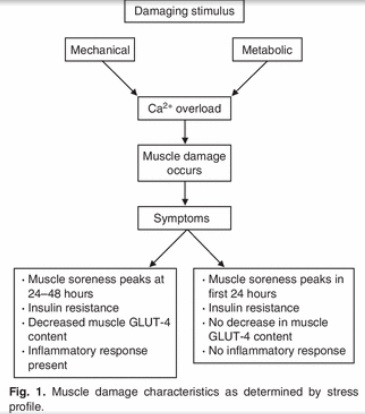 Hyponatremia – Extreme exercise conditions (equal or above three hours continuously), such as the marathon or triathlon, without the intake of electrolytes increase the risk dehydration or hyponatremia (83). Symptomatic hyponatremia is typically observed with greater than 6 hours of prolonged exercise. Acute water toxicity happens due to rapid consumption of large quantities of water that greatly exceeded the kidney’s maximal excretion rate (from 0.7 to 1.0 L/hour) (1).

Exercise-associated hyponatremia (EAH) typically occurs during or up to 24 hours after prolonged physical activity, and is defined by a serum or plasma sodium concentration below the normal reference range of 135 mEq/L (86,87).

Usually only less than 1% of marathons athletes present signs of EAH (88,89), however it was as high as 23% in an Ironman Triathlon (90) and 38% in runners participating in a marathon and ultramarathon in Asia (91). There’s also now a trend for symptomatic EAH for shorter distance events, such as a half marathon (92) and sprint triathlon taking approximately 90 minutes to complete (93). There’s also no statistical significance for the incidence of symptomatic between genders (55), though women may be at greater risk than men (55).

We have seen that the major risk factor for developing EAH is excessive water intake beyond the capacity for renal water excretion (1,100,101) largely as a result of persistent secretion of arginine vasopressin (102,103). Elevations in brain natriuretic peptide (NT-BNP) may lead to excessive losses of urine sodium and raise the risk of hyponatremia (104).

Another concern is the inability to mobilize body sodium bound in bone. Sodium can be released from internal stores such as bone (105,106,107), 25% of body sodium is bound in bone (osmotically inactive) and is potentially recruitable. Inability to recruit sodium from that pool may increase the risk of hyponatremia.

Individuals under normal conditions are able to excrete between 500 and 1000 mL/h of water (108), plus the non-renal losses of water as sweat, so athletes should be able to consume as much as 1000 to 1500 ml/h before developing water retention and dilutional hyponatremia, therefore it seems likely that excessive water intake (>1500 mL/h) is the main cause.

The combination of excessive water intake and inappropriate AVP secretion will clearly lead to hyponatremia. 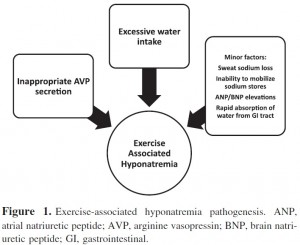 Arginine vasopressin (AVP) must be suppressed appropriately with water loading, otherwise the ability to produce dilute urine is markedly impaired (109).

Water can also be absorbed from the gastrointestinal tract at the end of a race causing an acute drop in serum sodium concentration (110), with clinical signs of EAHE after 30 minutes. During exercise, breakdown of glycogen into lactate increases cellular osmolality and rises serum sodium, but some minutes after exercise this is reversed and serum sodium levels drop (111,112).

The risk also rises if the degree of fluid loss through sweat is sufficient to produce significant volume depletion (stimulating AVP release and impairing urine excretion of water), coupled with ingestion of hypotonic fluids (86).

Although not conclusive, nonsteroidal anti-inflammatory drugs (NSAIDs) have been implicated as a risk factor in the development of EAH by potentiating the water retention effects of AVP at the kidney (86).

At least two strategies can be used to present EAH: avoid overdrinking (real time sensation of thirst) and limiting the availability of fluids during events. Supplementation with sodium may delay of even prevent the decline in blood sodium concentration (113,114) however drinking beyond thirst (overdrinking) will not prevent hyponatremia (115), the amount of fluid ingested is more important than the amount of sodium ingested for blood sodium concentrations (116).

EAH has a complex pathogenesis and multifactorial etiology: 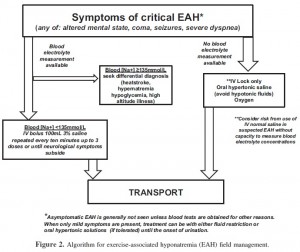 An athlete should consume approximately 500 to 600 mL (17 to 20 fl oz) of water 2 to 3 hours before exercise (117). By hydrating several hours prior to the exercise, there is sufficient time for urine output to return toward normal before starting the event (30).

For normal athletic events in moderate temperatures (and altitudes), it should be enough to hydrate slowly over several hours. If the body needs water urgently it can absorb some water right through the walls of the stomach. A 1% to 2% decrease in your body weight (due to water loss) will affect performance.

The threshold for reduced performance appears to be 2% body water loss of total body mass (118,119). Dehydration equivalent to 1.5% to 2% of total body mass may decrease performance up to 15% (120). We’ve seen before that 3% to 4% losses impairs muscular strength by 2% and muscular power by 3% (35), and also reduces high-intensity endurance performance (e.g., distance running) by approximately 10% (123).

Caffeine is the most common ingredient, and is absorbed in 30 – 60 minutes (128). Caffeine 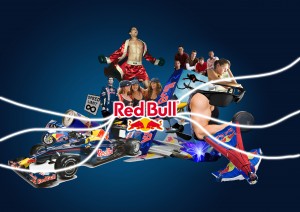 Carbohydrate feeding during exercise can improve endurance capacity and performance (131,132), through maintenance of blood glucose levels, high levels of carbohydrate oxidation (1 g of carbohydrate per minute), while sparing liver and skeletal muscle glycogen (133).

Energy drinks can improve mood, reaction time, and/or markers of alertness, most likely due to the ergogenic value of caffeine and/or carbohydrate.

Caffeine can elevate metabolic rate and the rate of lipolysis. 200-500 mg of caffeine (typical of thermogenic supplements) can increase acute energy expenditure (1-24 hours) (127), chronic energy expenditure (28 days) (134), and elevate plasma free-fatty acid, glycerol levels and catecholamine secretion (127, 134). The caffeine in energy drinks ranges from 80-200 mg, and it’s not conclusive whether daily use of ED would affect long-term energy balance and body composition (127).

Individuals with metabolic syndrome and or diabetes mellitus should avoid consumption of high glycemic drinks and/or foods. More importantly, individuals with known cardiovascular disease should avoid any use of energy drinks due to the cardio stimulant effects (124).

More references here than there are chopsticks in a Chinese restaurant

8. EFSA (2011) Scientific opinion on the substantiation of health claims related to water and maintenance of normal physical and cognitive functions (ID 1102, 1294, 1331), maintenance of normal thermoregulation (ID 1208) and “basic requirement of all living things” (ID 1207) pursuant to Article 13(1) of Regulation