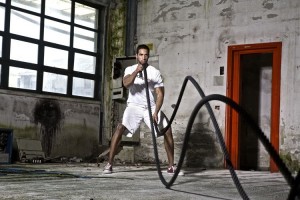 by Ryan Mallett USAW; FMS.  As a fitness professional, it’s imperative to stay educated and up to date with information; techniques and new equipment and its applications. Like in any industry, you will typically see something packaged as ‘new’, but has really been around for some time, leading you to believe the wheel has been reinvented. You may have seen various studio type gyms; boot camps even NFL teams and professional MMA fighters,  using large ropes being swung or whipped to varying degrees of success by their users, with “trainers” looking on and cheering for them to work harder or faster. Such ropes can be easily mis-used but were they used correctly, could really step up your fitness game. No, those aren’t ‘boat ropes’ buddy…they’re Battling Ropes!

What are these Battling Ropes, and aside from looking really cool to use, what can they do for you?  Well, if you want to know the real scoop on something, you go right to the source, and that’s just what I did. I had the honor of talking to Mr. John Brookfield (world record holding strong man known as ‘Mr. Hands’), inventor and pioneer of The Battling Ropes System, and got the low down on this amazing piece of equipment.

As a world record holder athlete, John was searching for something that could help to build and sustain power, but over time. It had dawned on him that hurricanes generate unyielding power in waves, and he determined that ‘waves’ can be produced with ropes. The Battling Ropes System was born. Within the entire system, there are seven concepts of the non-momentum style training, each system stemming from the ‘velocity + strength and speed together’ ideology. Although each system uses different applications of the Battling Ropes, simply looking for a great workout from using any of John’s systems will help you to achieve stress relief; better concentration and coordination in motor function; enhanced focus and motivation; increased muscular endurance & sustained work capacity by helping to push out lactic acid. It’s safe; anyone can do it and it’s visually motivating as well. Having used them at the Bridgewater Sports Arena here in Central NJ where I train myself, as well as varying populations of clients, people will stop to watch me make the waves and want to give it a try. The Battling Ropes come in one and a half, to two inch thick manila, or polyester styles which you can use indoor, or outside. The thicker the rope, the heavier it’ll be and the more your grip will be challenged.

John didn’t stop there though in offering up as much information as possible about the impressive Battling Ropes System. He put me in touch with Dr. Mike Martino who is the NSCA SE Regional Coordinator and Associate Professor of Exercise Science at Georgia College and State University in Milledgeville, GA. Dr. Martino had pointed out that in studies done at his schools labs using baseball players (pitchers more specifically), “the group [using the Battling Ropes System] had less of a drop off in pitching velocity than the traditionally trained group (running etc.). Arm power also went up significantly via arm cranking.”  The relatively low impact of the BRS clearly supports effective caloric expenditure and Dr. Martino says; “It’s easy to cause CNS (central nervous system) fatigue when people use the BRS correctly, but especially when they use it incorrectly and use too heavy of a rope. If someone can’t maintain a certain frequency for 60-120 seconds straight with perfect mechanics, than the actual rope mass is too great for them. Muscular, as well as anaerobic endurance are improved tremendously when the system(s) are used correctly. Neuromuscular endurance can be improved also, which it should be noted, is different than muscular endurance.”

For the ‘average Joe’ wanting to get into amazing shape, or even the most seasoned athlete looking to break through plateaus, anyone can gain tremendous benefit from The Battling Ropes System. For more information on The Battling Ropes; any other of John’s great products or DVD’s, visit his website; www.battlingropes.com. For personal training, consultations and programs, you can contact me at ryanmallett@hotmail.com.  Special thanks to Mr. Brookfield and Dr. Mike Martino for lending their time to talk about this great training tool.