Key Points To Memorize for the ‘Cardio Makes You Fat’ Crowd

After seeing another headline of “Does Cardio Make You Fat?” with the answer that ‘of course it does,’ I felt an urge to get off my couch, hit the pause button on “The Blacklist,” (awesome show BTW), and remind people that there is something called “science” that can actually answer that question. “I’m not sure why cardio has become the carb of the exercise world” says Rutgers professor Shawn Arent PhD.  And Dr. Arent hates cardio like rats hate cats, cats hate dogs, and dogs hate Michael Vick. 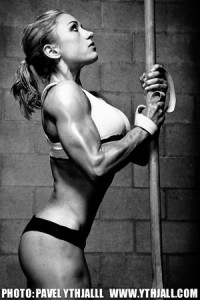 What the heck happened to folks actually reading the scientific literature? You know. Those studies in which scientists actually measure body fat. Instead folks fall hook, line and sinker for this pettifogging bullshit of how cardio affects your appetite, cortisol etc. If the claim is that ‘cardio makes you fat,’ the ONLY measure that matters is whether it makes you fat. Guess what? You need to measure body fat. It reminds me of these acute feeding studies that use whey, casein, amino acids etc. that try to extrapolate how much muscle you’d gain in the long run by looking at acute changes in muscle protein synthesis. I have a better idea. Why don’t you actually measure muscle or lean body mass after a treatment period that matters (ex. 8-12 weeks)? Getting back to my original point, imagine how boring the world would be without carbs or cardio?  You couldn’t eat donuts, take walks on the beach, or do both at the same time.

When did doing cardio suddenly become bad for fat loss?  The boneheads who write these articles should at least make a feeble attempt to read the literature. A simple search on Pubmed cross-referencing ‘aerobic’ with ‘body composition’ shows 517 publications.  There are umpteen other searches of key words you can perform. I’m certain there’s at least one study that’s looked at whether cardio turns you from a lean mean kale-eating machine to a fat slob who dreads the day that buffets are outlawed by Congress.

So what gives? Why has the ‘cardio makes you fat camp’ become so entrenched among a few vocal gurus in the fitness industry? Answer: I haven’t an f’in clue.

Anyhow, let’s harken back to when Ronald Reagan was the President of the USA; that’s the 1980s for those who flunked US History.  Twelve weeks of doing aerobic dance training (3 days per week for 45 min) resulted in “…significant increases in lean body mass and body density, together with decreases in percentage body fat and the sum of four skinfold thicknesses…”[1] Holy smokes did you read that?  They lost weight and fat doing aerobic dance no less. Hmmm. 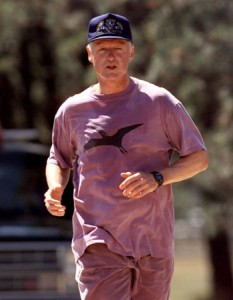 President Clinton should have done more cardio and less McDonalds.

Let’s fast forward to when Bill Clinton was America’s Commander-in-Chief. In this particular study, 60 Japanese women (~51 years of age) participated in a 3-month weight-loss program consisting of two groups: aerobic dance group and jogging and/or cycling group. Guess what, whether you dance, jogged or cycled, you lost body weight and body fat.  The study’s authors stated “low impact aerobic dance is as useful as jogging or cycling in improving body composition and aerobic power for mildly obese middle-aged women.”  Whoa Nellie.  Isn’t cardio supposed to make you fat?[2]

Now let’s get a bunch of fat adults and see what happens? In this study, science nerds determined the effect of aerobic exercise, without energy restriction, on weight loss in sedentary overweight and obese men and women. The key words being ‘without energy restriction.’ Thus if cardio truly makes you a porky pig, then it would happen in this study.

Participants were randomized into a 400 calorie/session, a 600 calorie/session or to a non-exercise control. Exercise was supervised, 5 days/week, for 10 months.  Now if we use the sterling logic of the ‘cardio makes you fat’ crowd, then one would predict that the 600-calorie/session group would be the fattest at the end of the study, correct?  Well, good thing we have science to answer this question and not some voodoo-witch doctor-fitness guru bullshit.  What happened? “Significant changes in percent body fat over 10 months were observed in both the 400 (-2.9%) and 600 (-4.4%) kcal/session groups. Percent fat was unchanged in the control group (-0.6%). The reductions in body weight observed in both exercise groups were a result of decreased fat mass and preservation or increase in fat-free mass.”[4] Wait did I read that right? The group that did more aerobic exercise actually lost body weight and fat?  What’s going on here?  Why aren’t these cardio kings and queens getting fat?  Because exercising (no matter what type) doesn’t make you fat. And if you believe otherwise, then you may as well get into the business of unicorn breeding. 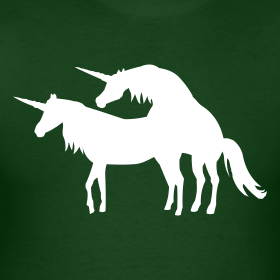 Are you bored yet? Does science have a way of beating the crap out of dogma? Anyone who claims that ‘cardio makes you fat’ has more hot air than the Hindenburg.

Here are a few more bite-sized bullets for you to remember:

What happens to athletes who train for years? This is where the story gets interesting. It should be as clear as the majestic blue water of the Caribbean that in untrained, fat, and/or average individuals, doing consistent aerobic exercise leads to a drop in body fat. The fact that I’m typing that sentence shows how silly the fitness industry has become. Perhaps in my next article, I’ll attempt to convince you that water is wet. But apparently some need convincing. Anyhow, there are several very cool studies on athletes. Do they get fat with all that aerobic exercise? 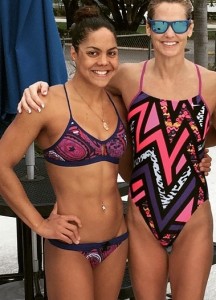 Check out my friend Arlene Semeco (left) with Dara Torres. All that swimming sure is making them fat, huh?

Steve Fleck PhD did a descriptive study back in 1983 showing the physical characteristics of elite American athletes.[10] (See Table 1) If cardio truly made you fat, then for chrissakes why are marathon runners so lean? I know I know. Genetics. Are they lean because they run?  Or do they run because they are lean? Or both? You might look at swimmers and say ‘hey, their body fat percentage tends to be higher than other elite athletes.’ And you’re correct. It has to do in part with thermoregulation (water is colder than ambient air temp), the buoyancy of fat (it floats), etc.  But to say ‘swimming makes you fat’ would make about as much sense as telling an Irishman to lay off the pint, feckin eh.’ You’ll notice that sports that are very anaerobic as well as highly aerobic in nature have athletes that demonstrate single digit body fat levels. Sports in which your body weight is supported tend to have higher body fat levels. So if your tutorial on science was from internet experts and the ‘science for dummies’ book, then you might conclude that having your body weight supported makes you fat. Watch. Some dipshit will post that as an internet meme.

A 1997 study from former QB Tim Tebow’s alma mater did a 20-year follow-up of track and field athletes.[11]  Six of these athletes ran the 800m, 17 did the 1500m distance or longer, and two were race walkers.  Athletes were divided into the follow three groups: high (remained elite), moderate (still performed frequent moderate to rigorous endurance training) and last but not least, low (greatly reduced training). So using the ‘cardio makes you fat’ logic, would not those who trained the most (i.e. high) exhibit the highest levels of fat?  See the answer in Table 2.

Table 2. 20-Year Follow Up of Track and Field Athletes

As you can see (and if you can’t, you need eyeglasses), those who train the most, have the lowest amount of fat.  This applies even as they age.  If anything, it should be clear that getting old results in higher body fat levels.  Yes.  In the battle of aging versus you doing everything right (i.e. exercise regularly and eating well), aging ALWAYS wins.

Distance Runners versus Bobsledders – In a classic comparison of endurance versus power athletes, Marti and Howald investigated the alterations in their physical characteristics over a 15-year period from 1973 to 1988.[12]  First let’s do a direct comparison of runners and bobsledders. (Table 3)

You’ll notice that runners are leaner than bobsledders at all time points. Wait a sec. I thought cardio makes you fat? Interestingly, bobsledders are quintessential power athletes. Shouldn’t they be leaner than distance runners? Now let’s just look at the distance runners and divide them into highly active (ran >90 km/wk), active (30-65 km/wk) and former runners (less than 30 km/wk).  (Table 4) 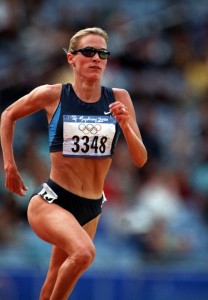 Suzy Favor could run! We wrote a book about training and nutrition for distance running many moons ago. Check it out. It’s called “Fast Track.”

Well whaddya know.  Distance running (in general) keeps you pretty lean. Those who kept running (and did the most mileage per week) were the leanest. Those who did the least amount of that dreaded cardio, got fatter.[12]  In fact, triathletes that perform more aerobic training actually have lower % body fat levels than those who do less.[13] Why that is surprising to anyone baffles me. It’s like being surprised that kangaroos jump, eagles fly and Venezuela runs out of toilet paper.

Cardio and Muscle Mass – On the flip side, too much cardio may promote a loss of lean body mass.  But that’s NOT the same as saying ‘cardio makes you fat.’ Sometimes I feel like folks who post dopey stuff on social media need a class in ‘how to ask the right question.’  One particular study showed that in young women, doing aerobic exercise for 12 weeks promoted a loss of body weight, % body fat and BMI. But it also resulted in a loss of lean body mass.[14] On the other hand, aerobic exercise attenuated the loss of muscle mass during calorie restriction in adults with fat bellies.  Folks that dieted only lost fat and lean body mass.[15] So if you want to argue that aerobic training might result in a loss of muscle mass, you’ll have scientific support.  But it certainly isn’t universal.  Some might lose lean body mass, others not so.  Heck, some might actually gain lean body mass if they are initially very untrained.

Side Bar – Fasted versus Fed Cardio – In an elegant study by Shoenfeld et al., they investigated changes in fat mass and fat-free mass following four weeks of volume-equated fasted versus fed aerobic exercise in young women on a lower calorie diet. Training consisted of 1 hour of steady-state aerobic exercise performed 3 days per week. Holy smokes!  Dr. Brad is going to make these girls fat.  How did he ever get this through the IRB and Human Subjects Review? What did they discover? Both groups showed a significant loss of weight and fat mass from baseline; however, there were no significant between-group differences. All that cardio made them fat said no scientist ever.

The moral of the story: 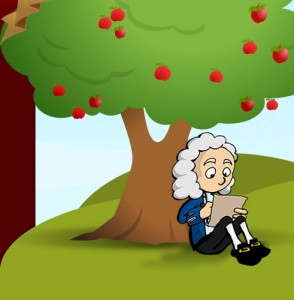 Read This All You Cardio Haters

BIO – Jose Antonio PhD wishes he could run but he’s slower than a sloth on Xanax. He wishes he could swim but he looks like a drunk bulldog flappin’ in the water. Instead he

paddles. The beach, sunshine, and a good sweat – you can’t beat that.

If you want to buy me a beer or donate money to support my sushi habit, meet me in Austin Texas June 11-13, 2015 at the ISSN Conference and Expo.