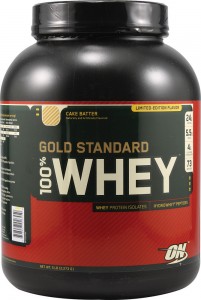 Whey protein (WP) supplementation has recently gained popularity amongst athletes as it is reported to improve athletic performance. WP is a popular dietary protein supplement purported to provide improved muscle strength and body composition due to greater a compliment of essential amino acids and branched chain amino acids and to result in greater biological value (1-4). Additionally, WP supplementation has shown to reduce oxidative stress through increasing endogenous glutathione production and improve compromised gut health associated with intense exercise (5-8). While the a majority of the research and topics covered in this post are WP supplementation specific, I want to remind everyone that whole foods sources of whey protein may be superior in terms of nutrient synergy than WP supplementation; however, the research surrounding that issue is not well established.

Increase Strength and LBM – Most athletic events are reliant upon force production of muscles, with greater ability to produce force associated with improved performance. As force is equal to mass x acceleration (F=M*A), increasing the muscle mass is the most common way athletes aim to increase force production. Skeletal muscle hypertrophy requires proper resistance training and nutritional status in which muscle protein synthesis (MPS) exceeds muscle protein breakdown (MPB). One of the major concepts in the literature surrounding skeletal muscle hypertrophy is the idea of net protein balance (NPB).  NPB is defined as MPS minus MPB (NPB = MPS – MPB). Thus, if MPS is greater than MBP, skeletal muscle hypertrophy will occur (9).  One of the critical factors influencing MPS and MBP is the availability of amino acids (10, 11). WP supplementation is a source of high biological value amino acids and has been purported to increase muscle mass and strength.

There is an extensive body of research surrounding the efficacy of WP supplementation in increasing strength and muscle mass.  The results of the research are not entirely unequivocal; however, a significant amount of evidence suggests that WP increases both strength and muscle mass (12-15).  Additionally, researchers have recently shown that the constituents of whey protein upregulate the cell signaling pathways responsible for muscle protein synthesis and muscle hypertrophy, specifically the mTOR pathway (16).

Whey Protein and Glutathione – Oxidative stress refers to an imbalance between antioxidant defense systems and production of reactive oxygen species (ROS) (17).  Oxygen consumption during heavy exercise can increase up to 100 times normal resting levels, thus increasing the production of free radicals and resulting in oxidative stress. Although the data are not unequivocal, evidence exists showing increased free radical production and cellular damage following heavy exercise (18).  Athletes are at a higher risk of elevated oxidative stress due to the increased pro-oxidative process they expose themselves to than their non-athletes counterparts (19). The increased levels of ROS produced during heavy exercise must removed by the body’s endogenous antioxidant system in order to maintain oxidative balance

Glutathione, the most abundant and important antioxidant, is a tripeptide synthesized from the amino acids L-cysteine, L-glutamic acid, and glycine (20). It is the most important redox couple and plays crucial roles in antioxidant defense, nutrient metabolism, and the regulation of pathways essential for whole body homeostasis (21). Additionally, glutathione serves as a regulatory compound in the activation of the circulation agents of the immune system, lymphocytes (22).  It is apparent that glutathione is a critical compound in maintaining health and glutathione deficiency has been linked to numerous pathological conditions including, cancer, neurodegenerative disorders, cystic fibrosis, HIV and aging (23). Glutathione is of particular interest in the athletic population as the concentration of glutathione varies considerably as a result of nutritional limitation, exercise, and oxidative stress.

The intense physical demands of athletics places athletes’ bodies under high levels of physiological stress.  Glutathione plays a critical role in maintaining normal redox status during exercise (24, 25). Furthermore, exhaustive exercise has been shown to reduce glutathione status (24, 25, 26), thus indicating the need for bolstered levels of glutathione in athletes.  Researchers have shown that the amino acid cysteine is the rate-limiting factor in glutathione synthesis (27, 28). Therefore, the inclusion of cysteine rich protein sources may prove efficacious in increasing glutathione synthesis rates by providing ample amounts of cysteine to the amino acid pool.  Supplementation with free cysteine is not advised however as it spontaneously oxidized and has shown to be toxic (29). Dietary sources of cysteine present as cystine (two cysteines linked by a disulfide bond) are more stable than free cysteine and properly digested.  WP supplements, including WP isolate and WP concentrate are protein sources rich in cysteine and deliver cysteine to the cells via normal metabolic pathways (30,31).  By providing abundant cysteine, WP supplementation allows cells to replenish and synthesize glutathione without adverse effects (31) (Figure 1.). Thus, WP supplementation may serve to bolster the endogenous production of glutathione and improve oxidative stress in athletes.

The use of WP supplementation to mitigate a training-induced decline in blood glutathione levels has been studied extensively. Researchers have shown that WP supplement is beneficial in maintaining normal physiological levels of glutathione in athletic and non-athletic populations in response to exercise (32-34).  Furthermore, researchers have shown that WP improves the athlete’s ability to deal with acute oxidative stress and WP may serve as a safe and effective alternative source of antioxidants for prevention of athletic injuries and sickness caused by excessive reactive oxygen species (ROS) (35).  The research regarding WP supplements and glutathione status supports the use of WP in athletics to improve health status in athletes by augmenting the endogenous antioxidant system.

Whey Protein and Immune Function – Strenuous exercise and heavy training regimens are associated with depressed immune cell function (36-40). Furthermore, inadequate or inappropriate nutrition can compound the negative influence of heavy exertion on immunocompetence. Suppression of the immune predisposes the individual to an increased risk of infection.

Athletes increase both the volume and intensity of their training a certain stages of the season that may result in a state of overreaching or overtraining. Recent evidence has emerged indicating that immune function is indeed sensitive to increases in training volume and intensity. Although the research has not shown that athletes are clinically immunocompromised during these periods of depressed immune function, it may be sufficient to increase the risk of contracting common infections.

As the components of the immune system are highly dependent on amino acids, endogenous and dietary amino acids can impact the state of the immune system. In comparison to other protein sources, research shows that whey proteins are unique in their ability to promote strong immunity through several beneficial compounds including: glutamine, α-lactalbumin and β-lactoglobulin, and minor fractions such as serum proteins, lactoferrin, as well as a series of immunoglobulins (41-43).

Whey Protein and Gut Health – Intense physical exercise leads to reduced splanchic blood flow, hypoperfusion of the gut, and increased intestinal temperatures (44). Reduced intestinal blood flow and high intestinal temperatures during intense exercise can lead to intestinal barrier dysfunction through increased permeability of the tight junctions (5, 8). The increased permeability of the intestinal wall leads to invasion of Gram-negative intestinal bacteria and/or their toxic constituents (endotoxins) into the blood circulation (45-47). Endotoxins are highly toxic lipopolysaccharides (LPS) of the outer cell wall of Gram-negative bacteria. LPS are a major trigger in vivo for the host immune response via induction of the cytokine network (45). (Jeukendrup, et al., 2000). This process, endotoxemia, can result in increased susceptibility to infectious- and autoimmune diseases, due to absorption of pathogens/toxins into tissue and blood stream (48).

As previously mentioned, tight junctions constitute the major component of gut barrier function and acts as physical and functional barrier against the paracellular penetration of macromolecules from the lumen (56,57). Therefore, the regulation of tight junction permeability is critical in maintaining gut integrity and reducing the exposure of the body to endotoxins. The amino acid glutamine is critical in maintaining the integrity of these tight junctions (56). Glutamine, the most abundant amino acid in the blood, is considered a “conditionally essential” amino acid (Figure 2.) (56). Under normal conditions glutamine is produced in sufficient quantities in the body to maintain the normal physiological functions. However, under stressful situations, such as exercise, endogenous production of glutamine insufficient and the body must rely on exogenous sources of glutamine to meet its requirements. 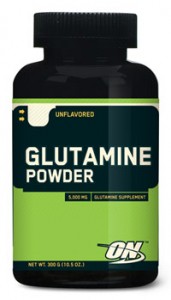 Whey protein is an excellent source of a wide range of amino acids and additional nutrients that are beneficial to health. Whey protein has been shown to increase lean body mass in conjunction with resistance training, bolster glutathione status, have immunomodulatory effects and improve gut health. A healthy, well balanced diet may be enhanced with whey protein through either whole food sources or occasional whey protein supplements.

22) Droge, W. (1996). Modulation of the immune response by cysteine and cysteine derivatives. Italian Society for Parenteral and Enteral Nutrition , 14, 1-4.

46) Lambert, G. P. (2008). Intestinal barrier dysfunction, endotoxemiz, and gastrointestinal symptons: the ‘canart in the coal mine’ during exercise-heat stress? Medicine and Sport Science , 53, 61-73.