This recent study was led by Drs. Alan Kristal from the Fred Hutchinson Cancer Research Center, and Theodore Brasky of The Ohio State University Comprehensive Cancer Center in the USA as a follow up to their 2011 study.  This new study analyzed data and blood plasma phospholipid status from men who participated in the SELECT (Selenium and Vitamin E Cancer Prevention Trial) trial from 427 participating sites across Europe, USA, Canada and Puerto Rico. Blood was analyzed for 834 “cases” diagnosed with prostate cancer (156 of which were high-grade), and an age-matched subcohort, comparison group of 1,393 all of which were selected from the 35,533 participants.

Without going into an in-depth review of the study (beyond the scope or goal of this post), the men with the highest blood plasma levels of the long-chain omega-3 PUFAs (EPA, DPA, and DHA) were associated with increased risk for low-grade, high-grade and total prostate cancer (44%, 71% and 43% increased risk, respectively).  Intriguingly, a higher omega-6 level (Linoleic acid) was associated with reduced risk of low-grade and total prostate cancer, but there was no dose response relationship. 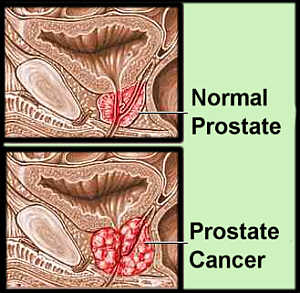 1) Within the prostate cancer cases, their plasma phospholipid fatty acid profile was divided into quartiles. The lowest risk group had < 3.68% tissue levels (plasma phospholipids) VS. highest prostate CA risk group being at > 5.3%. This is quite a narrow range of plasma phospholipid fatty acid concentration to draw conclusions from.  Moreover, the mean EPA + DPA + DPA fatty acid % in plasma phospholipids was only 4.48% in controls (non-cancer group), and 4.66% in the total cancer case group. Again, an even narrower range–caution must be taken before drawing sweeping or extreme conclusions and interpretation of this data. So, what does that mean for individuals who are supplementing actively with fish oil and simultaneously keeping vegetable oil LA (omega-6) intake down that typically walk around at 7-15% (who incidentally have lowest sudden cardiac death risk and lowest 25-year mortality rates)?

It is possible, that some biochemical scenario plays out where, with respect to prostate CA, you are better off either being real low (at which point your risk for cardiovascular morbidity & mortality goes up), or at the higher goal range of >8%?  There is some interesting preclinical, mechanistic data showing that high levels of DHA increases expression of SDC-1 (a transmembrane proteoglycan) in prostate tissue.  SDC-1 may help with mediating apoptosis (programmed cell death) of prostate cancer cells, by suppressing proto-oncogene (a normal gene that when mutated can cause cancer by deranging cell growth and differentiation mechanisms) signaling.

2) This is NOT a (RDBCT)…it isn’t even an open label “intervention-based” trial. Simply an epidemiologic, nested case-cohort based association.  The SELECT study was not designed specifically to look at omega-3 fatty acid associations, a priori (from earlier knowledge). That simply means the original SELECT randomized, placebo-cotrolled clinical trial was not originally set up to answer the question of whether “Increased intake of long-chain omega-3 polyunsaturated fatty acids lead to increased rates of prostate cancer development.”  Hence, that limits the “robustness” and “strength of causality assessment” of the data. Further, there was no mention in the study of dietary fish intake or fish oil supplementation.  Is it possible that the sicker individuals began taking fish oil or increasing their fish intake in an attempt to improve their health? Again, it does not allow us to discern whether the “association” exists with fish oil supplementation vs. fish from food sources vs. particular type of fish [Salmon vs. Mackerel vs. Sardine vs. Cooked (Grilled, Baked or Fried) or Raw as in Sushi]. Could there be some xenobiotic or persistent organic pollutants acting as a carcinogen in one of these sources?  After all, it is well established that certain heavy metals (e.g., cadmium, mercury), dioxins and PCBs are mutagenic and carcinogenic.

A few things stand out about the methods used to evaluate fatty acid status.  First, the plasma phospholipid fatty acid assay is considered to be more representative of ACUTE and dynamic biomarker of omega-3 fatty acid intake by many experts in the biochemical analysis of fatty acids.  Short-term factors such as a single meal or supplemental fish oil dose can increase plasma phospholipid omega-3 levels by over 2-fold within 6-10 hours. That is because this assay includes lipids found in the lipoprotein fraction of blood (such as chylomicrons, LDL subtypes, VLDL, etc.), not just in cell plasma membranes such as the omega-3 index (% of omega-3 fatty acids in RBC membrane).  Erythrocyte (or Red Blood Cell) membrane fatty acid analysis is a more reliable biomarker of SUBACUTE omega-3 fatty acid intake, with stable values reflecting dietary intake over a 2-3 month period.

Let’s admit that this study utilized data mined from a very large, prospective study, with a large number of prostate cancer cases—this is a strength. The SELECT trial that this study was based on had a very good follow up and small amount of attrition.  This minimizes the potential for a phenomenon we observe in research known as attrition bias (a kind of selection bias, where the subjects who dropout are discounted, effectively changing the characteristics of one comparison group vs. another that may lead to drawing inappropriate conclusions from the data/results).

3) Then, we do need to consider the question of whether there is “fire at the heart of this smoke” that could be attributable to some as yet undetermined mechanism?  After all, there are at least 3 more large studies that support the findings of this study.  However, there are also at least 3 other studies that conflicts with the current study showing an inverse relationship between long-chain n-3 PUFA tissue levels and prostate cancer risk.  Keep in mind that cancer biology is incredibly complex with, not only many factors that contribute to risk, progression, etc., but also many of these very factors interact to create even more layers of complexity.

Having said that,  I have a few theories, including:

** In the case of prostate biology, immune “surveillance” of cellular oncoproteins play a much larger role in identifying and creating cytotoxicity and apoptosis (programmed cell death pathways) to keep these precancerous cells at bay.

** At certain levels of tissue n-3 concentration, there may be a physiologic/molecular environment whereby mitogenic/ oncogenic and cellular proliferative pathways are driven forward and, while tumor suppressive and differentiation pathways are inhibited. This scenario could promote tumorigenesis/ carcinogensis, especially in a scenario where there is just enough immune suppression to allow for this cellular activity to spiral out of control, without the typical safety mechanism and breaks that would limit DNA mutagenesis & damage.

** Lipid peroxides generated at the local prostatic tissue level may, in certain individuals, overwhelm their capacity to neutralize this oxidative stress.  This scenario could theoretically lead to increased DNA damage, that increases potential to outpace DNA repair mechanisms and transform cells to loose cell growth/proliferation regulation.

** Could there be certain genotypes (nutrigenetic & epigenetic mechanisms) that increase susceptibility to the above theories? Given what we have learned from genome wide association studies (GWAS) in the last decade, this is certainly a possibility.

4) Interestingly, this association appears to be tissue specific. As opposite association (inverse relationships) exist for omega-3 status and other cancers, e.g., breast, colon, and possibly pancreatic.

5) There is interesting data that demonstrates what I would refer to as a “metabolic dissonance” in energy metabolism of prostate cancer cells.  In stark contrast to cancers of other tissues, where metabolism becomes more heavily glycolytic (strong preference to using glucose for fuel during energy metabolism), prostate adenocarcinoma cells appear to switch toward greater beta-oxidation of fatty acids to drive its bioenergetic needs! This “metabolic dissonance” with respect to the unique physiology of prostate cancer could very well be a major factor leading to the observed association between long-chain omega-3 PUFA and prostate tumorigenesis in Brasky et al study.

6) Prostate cancer detection has increased dramatically over the last 10-15 years, not only due to the prevalence of PSA screening, but also lower threshold to biopsy has lead to increased diagnosis.  This is particularly the case with detection of microfoci of prostate malignant cells in smaller (lower volume) prostates…Hence, there is a greater probability of sampling malignant microfoci in smaller prostates.  This is an aspect that was not controlled for (Hazard ratios in the study were not adjusted for this variable) in the Brasky et al study.

8) It is also imperative to try adding context and maintaining perspective whenever faced with new information that may change behavior; or in this case, information that may change clinical management and dietary advice.  Lets keep the following numbers in mind to add some more perspective, color and light to this data from a public health, and risk assessment standpoint. (from National Cancer Institute-Surveillance Epidemiology and End Results, and National Heart, Blood and Lung Institute-NIH):

9) Although the jury is still not out with respect to the relationship long-chain omega-3 PUFAs found in fatty fish and fish oil and prostate cancer risk, progression or severity, I believe the sheer numbers tell us what the lowest hanging fruit is relative to public health focus and resources.  I do agree with the authors that prostate health history should be taken at least be taken into consideration, when weighing potential risk to benefit ratio of increasing long-chain n-3 PUFA intake.

10) As with so much in science, medicine, health and nutrition, the more data we have access to, the more questions arise.  One burning question this study raises that is of interest to consumers, industry and health care providers—How would these findings change when evaluating specific dietary sources of long-chain n-3 PUFA (e.g., concentrated fish oil supplements vs. Sushi vs. Baked, Grilled or Fried fish)?

Overall, the benefits of increasing omega-3 status (and decreasing omega-6 overabudnance) for most people FAR outweigh potential risks.  Stay tuned…but as always keep a cool head and try to avoid being drawn into dramatic, emotionally-charged and sensational headlines. These observational, case-control cohort studies may be useful for generating hypotheses to test in well-controlled prospective clinical trials, but far from establishing causality. So, what am I doing with this information you ask?  Well…I’m still taking my fish oil, eating a variety of fish while we await for stronger evidence (which I seriously doubt we’ll ever see :)). Oh, and by the way, NO…I am not going to intentionally increase my omega-6 vegetable oil intake—despite the fact that this study revealed that elevated plasma omega-6 fatty acid levels were associated with decreased risk of low-grade and total prostate cancer. Remember to take your fish oil and call me in the morning! J

Dr. Lopez is a board-certified specialist in physical medicine and rehabilitation, with a concentration in spine, sports and musculoskeletal medicine. He also has post-graduate training in nutritional biochemistry. An active researcher, speaker, author, and clinician, he is recognized for uniquely integrating the best available methods in the fields of musculoskeletal medicine, endocrinology and metabolism, regenerative medicine, exercise and nutritional science. Dr. Lopez has been a founding partner and director of several integrative orthopedic, spine, and sports medicine facilities, and he is a principal and chief medical officer of the Center for Applied Health Sciences (CAHS), a leading multidisciplinary clinical research institute. Dr. Lopez is also co-founder of Supplement Safety Solutions (SSS), a NutravigilanceTM, quality assurance, medical monitoring, and regulatory consulting company. In addition, he is a consultant to professional athletes and to the nutritional supplement industry as product developer, research advocate, and safety and regulatory expert.