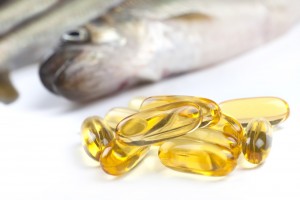 Most supplements are used for one specific outcome, for example fat loss, muscle growth or general health promotion. However, there are a few exceptions. Fish oil is one of them.

We all know about the cardiovascular health benefits of fish oil, and in a previous article I covered the fat loss effect of fish oil. Now let’s take a look at the potential application of fish oil for those of us who are interested in muscle growth…

Muscle protein undergoes a continuous process of synthesis (anabolism) and degradation (catabolism). In a healthy state, the anabolic and catabolic processes are balanced to maintain stability of or even increase muscle mass (as is observed with resistance training combined with proper nutrition).

Catabolism of muscle tissue is common in both clinical states (for example diabetes, renal failure, trauma and cancer) and during diet-induced weight loss and other stress conditions 1-6. During these catabolic states, muscle protein degradation exceeds muscle protein synthesis, which results in muscle loss and weakness.

Another mechanism by which fish oil exerts its anti-catabolic effect is by reducing cortisol levels 1718. As we all know, cortisol breaks down muscle tissue 19 and has a host of other detrimental effects when present at chronically elevated levels (which is a topic in its own right), so this is a beneficial effect of fish oil beyond anti-catabolism. 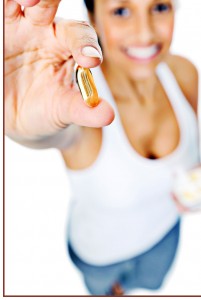 What makes fish oil especially interesting is that it seems to promote muscle growth by not only inhibiting muscle catabolism, but also by stimulating muscle anabolism. Recent studies showed that supplementing for 8 weeks with 4 g per day of fish oil concentrate providing a daily dose of 1.86 g EPA and 1.5 g DHA, significantly increases the anabolic response of muscle protein synthesis to amino acids and insulin 20. The augmented anabolic response to amino acids and insulin was shown to be due to an increased activation of the mTOR/p70S6K signalling pathway, which is considered an integral control point for muscle protein anabolism 21 and muscle cell growth 22-25.

Other mechanisms probably contribute as well. The same study showed that the fish oil supplementation in  25-45 year old healthy subjects doubled the proportion of EPA, DPA (another less talked about omega-3 fatty acid) and DHA in muscle cell membranes, at the expense of omega-6 fatty acids and mono-unsaturated fatty acids, with no change in saturated fatty acid) concentrations 20. Thus, it is also possible that fish oil supplementation influences anabolic signalling cascades by affecting membrane lipid composition and/or fluidity 26-29.

Are you older than 45 yr? Don’t fret, you will still benefit from the muscle anabolic effects of fish oil. The same research team conducted another study, using an identical research protocol (1.86 g EPA and 1.5 g DHA for 8 weeks), in healthy elderly subjects over 65 years (mean age 71 years). The results were the same as in the younger subjects; the fish oil supplementation significantly increased the muscle protein synthetic response to amino acids and insulin 30. Thus, fish oil seems to attenuate the anabolic resistance associated with old age 31-33. The researchers were so impressed with the response that they concluded fish oil can be useful for both prevention and treatment of sarcopenia 30.

In both of these studies, muscle mass was not measured because the interventions only lasted for 8 weeks. However, taking into consideration that changes in muscle protein metabolism precede corresponding changes in muscle mass 34-36, these results are promising. It is going to be interesting to see longer term studies that measure actual fish oil induced gains in muscle mass, and also how the anabolic response to fish oil interacts with resistance training.

Whether you’re looking to build muscle or prevent loss of muscle during a diet, evidence supports the addition of fish oil to your supplement regimen. Fish oil, and especially EPA, not only counteracts the detrimental loss of muscle mass that we see in stressful and catabolic states, but also boosts the anabolic response to nutritional stimuli in healthy muscle from both young, middle-age and older adults. Thus, it beneficially affects both the catabolic and anabolic sides of the muscle protein balance equation.

The studies to date used a fish oil dose corresponding to 1.86 g EPA and 1.5 g DHA (which can be considered to be a medium high dose). We don’t know yet if a higher or lower dose would have a greater/smaller effect, but this dose is a good guideline to start with.

9. Jagoe RT, Goldberg AL. What do we really know about the ubiquitin-proteasome pathway in muscle atrophy? Current opinion in clinical nutrition and metabolic care 2001;4(3):183-90.

16. Smith HJ, Tisdale MJ. Induction of apoptosis by a cachectic-factor in murine myotubes and inhibition by eicosapentaenoic acid. Apoptosis 2003;8(2):161-9.

BSc and MSc in Nutrition from the University of Stockholm