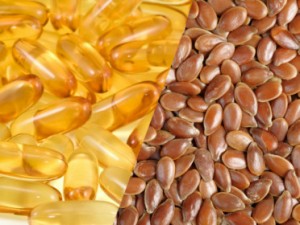 By Monica Mollica.  While most people are aware of the health benefits of omegs-3 fat, there is still a lot of confusion regarding the different omega-3 fatty acids. It is important to clear this out because not all omega-3 fatty acids are of equal effectiveness.

While our bodies can convert ALA to EPA and DHA in the body, this conversion is extremely inefficient 19-25. It has been shown that the conversionof ALA to EPA is only between 0.3% and 8%, while  the conversion of ALA to DHA is often undetectable in men 21-24. Conversionof ALA to long-chain n–3 fatty acids appears is more efficient in women: up to 21% of consumed ALA is converted to EPA and up to9% is converted to DHA 19, 25. Even so, it is not enough to get an effective dose of EPA and DHA (2-3 g), which can only be obtained by consuming fish or supplementing with fish oil or algae oil. Algae oil is a vegetable source of DHA, while fish oil contains both EPA and DHA.

Apart from the low conversion efficiency of ALA to EPA and DHA, another concern with ALA is that it might cause prostate cancer 26, 27. This is another reason to supplement with fish oil instead of flax oil.

Therefore, to ensure adequate amounts of the active omega-3 fatty acids EPA and DHA, which is around 2-3 g, intake of these fatty acids via fatty fish and/or fish oil and algae oil is recommended, since we cannot rely on our body’s conversion of ALA.

References (As they say on ‘CSI,’ “Just Follow the Data”).

Monica Mollica has a Bachelor’s and Master’s degree in Nutrition from the University of Stockholm, Sweden, and is an ISSA Certified Personal Trainer. She works a dietary consultant, health journalist and writer for www.BrinkZone.com, and is also a web designer and videographer; Monica has admired and been fascinated by muscular and sculptured strong athletic bodies since childhood, and discovered bodybuilding as an early teenager. Realizing the importance of nutrition for maximal results in the gym, she went for a major in Nutrition at the University.  During her years at the University she was a regular contributor to the Swedish bodybuilding magazine BODY, and she has published the book (in Swedish) “Functional Foods for Health and Energy Balance”, and authored several book chapters in Swedish publications. It was her insatiable thirst for knowledge and scientific research in the area of bodybuilding and health that brought her to the US. She has completed one semester at the PhD-program “Exercise, Nutrition and Preventive Health” at Baylor University Texas, at the department of Health Human Performance and Recreation, and worked as an ISSA certified personal trainer. Today, Monica is sharing her solid experience by doing dietary consultations and writing about topics related to bodybuilding, fitness, health and anti-aging.