Calling all athletes, what kind of surfaces are you sprinting on these days? We truly hope you are not sprinting on

concrete surfaces, unless you are sprinting away from your girlfriend because you forgot it was her birthday. Otherwise sprinting on concrete is a big no no and could cause a potential injury and are tough on your joints overall.

We remember when we were kids and we used to have sprint competitions against our friends on concrete surfaces, boy those were fun until one of us took a hard spill. After thinking about that hard spill, we think other surfaces would be more optimal to sprint on. All kidding aside, one of the best surfaces to do some all out sprints or HIIT cardio is on sand. Yes, sand, as in beaches, beautiful weather, and hot babes all around. Now, we know everyone doesn’t have access to sand surfaces, but for those that do it’s time to try doing your sprints on them.

Sand surfaces are harder to walk and run on than other surfaces because the feet slip and sink, which requires the leg muscles to stabilize the feet during the application of force. We promise you will not be disappointed with how grueling and tough sprinting on sand surfaces are. Oh and your joints will thank you in the long run, along with the rest of your body.

Where’s the proof in all this mumbo jumbo sprinting in sand talk, you ask? Before we discuss the study, we would like to give researcher Chris Beardsley a round of applause for discovering this study. A 2012 study conducted in the Journal of Science and Medicine in Sport, tested the biomechanics and predicted energetics of sprinting on sand surfaces. Previous researchers have observed that the energy cost of walking on sand is 1.8 – 2.7 times that of walking on from ground, while the energy cost of running on sand is 1.2– 1.6 times that of running on from ground. If you think about it, that is a pretty significant difference and could really be beneficial in everyone’s favor, especially athletes training in pre-season or possibly for rehabilitation purposes.

So what did the researcher’s do? 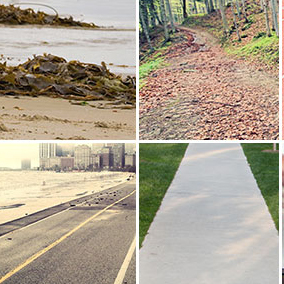 The researchers wanted to compare short sprints with or without changes in direction on sand, grass, and artificial turf. So they recruited 29 male professional soccer players

(7 defenders, 15 mid- fielders and 7 forwards). After a standardized 12-minute warm up, the researchers asked the athletes to perform a 12m maximum speed sprint and a 24m maximum speed shuttle sprint (with a 180 degree change of direction). The athletes performed both of these sprints on sand, grass, and artificial turf. Not concrete surfaces as we mentioned earlier, could be disadvantageous.

Changes in efficiency in sand: The researchers found that efficiency values (i.e., the ratio between mechanical power and metabolic power) of the sprints were 0.17 on natural grass and artificial turf, while the ratio was only 0.12 for sand.

So what did the researchers conclude in all of this?

This can’t be a study if there’s no conclusion right? Well, the researchers concluded that running on sand could be a useful tool for the following: training, injury prevention, and recovery. Pretty darn good benefits if you ask us. The main reasons they came to this conclusion was due to the stiffness values and how maximal speeds become lower on sand surfaces. Not to mention as we said earlier, this could serve your body well over time from possible joint issues or even the famous “shin splints” which can be pretty painful. The researchers also noted that “it is possible to carry out maximal intensity sprints on sand without reaching maximum speed, with lower stiffness, while also maintaining the same stride frequency but by reducing stride length, which represent less injury risk.” At the end of the day we are pretty sure everyone wants to stay injury free in order to maximize their full potential.

So we have some pretty cool data here to support the notion that sand is indeed a great and beneficial surface to do sprints on. Now, we are not saying that sprinting on grass, turf, or tracks are bad. We sprint on those surfaces all the time and have no pain what so ever. We are simply saying that sprinting on sand has its valid benefits and are very tough due to how your feet slip and sink in the sand to create the leg muscles to stabilize the feet during the application of force. Oh yes, not to mention if you have access to a beach then why the hell not take advantage of some awesome weather and do some sprints while flexing your guns and glutes. Overall you can’t go wrong with sprinting on sand, it’s great on your body, great for rehabilitation, great scenery, and whether you’re an athlete or not, just get out there and do some damn sprints!

(1)Gaudino, Gaudino, Albertia, and Minetti, Biomechanics and predicted energetic of sprinting on sand, Journal of science and medicine in sport, 2012.