By Scott Robinson.   There’s some serious confusion about saturated fat, and whether it is bad for the heart and is associated with diseases such as diabetes, stroke, and cancers.

The demonization of saturated fat began about 100 years ago, when a researcher fed a rabbit a high cholesterol carnivore diet and observed that its arteries became blocked with plaque.  However, this really took shape in the Fifties with the Seven Countries study by Ancel Keys(1), who reported that a higher saturated fat 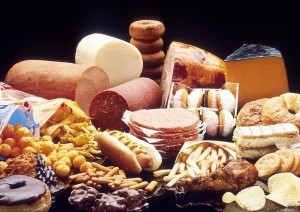 intake was associated with a higher cholesterol level and a higher rate of heart disease. The basic premise on which this condemnation lies is that saturated fat (found in foods such as meat, eggs, dairy products, coconut and palm oil) raises cholesterol which in turn, increases the risk of clogged arteries (atherosclerosis). Subsequently, the emergence of low-fat diets and ‘fat-free’ foods has spread with whipping speed and sweep with millions of people deciding to put low fat items into their shopping trolley in the belief that it is doing them good. But is fat, specifically saturated fat, the real criminal here or have we been somewhat misguided by company-funded research, fat-phobic conventional medical wisdom and the advertising prowess of a concept that now encompasses a multi-million dollar industry?

Saturated Fat is Essential for a Healthy Life

Fatty acids play several key roles in the body; they are essential components of all cell membranes, they are responsible for the absorption of the fat-soluble vitamins A, D, E and K, and include the essential n-3 and n-6 poly-unsaturated fatty-acids (PUFA).

The evidence that saturated fat is bad is limited. In fact, contemporary research states quite the opposite. A recent meta-analysis of prospective cohort studies(2) showed that the intake of saturated fat is not associated 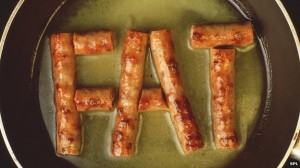 with an increased risk of coronary heart disease, stroke or those two combined (i.e. cardiovascular disease, CVD) before(2) or after(3) adjustment for serum total cholesterol. What’s more, an eloquent study published in the journal Nutrition(4), where researchers looked at the average intake of saturated fat in 41 European countries in 1998 (the latest available data) and the age-adjusted risk of mortality from heart disease, revealed something quite remarkable:

So, who is the Culprit?

Epidemiological and clinical studies show that PUFA plays a key role in the protection against CVD which has led to the suggestion that replacing saturated fat with PUFA is beneficial to cardiovascular health. A prospective study of cholesterol, apolipoproteins, and the risk of myocardial infarction found that replacing 5 en%  saturated fat by 5 en% PUFA reduces the risk of coronary heart disease by 9.1% (8). Interestingly, Kuipers et al. (5) reported that the replacement of SAFA with n-6 PUFA (notably linoleic acid) shows no health benefit and may actually signal towards increased CVD risk which tells us that the protective role of PUFA in the diet lies with n-3 PUFA!

Going ‘low-fat’ isn’t a particularly good option for weight loss nor health and well-being. Fat forms an essential component of the diet and there is increasing evidence to suggest that increasing saturated fat to ~15% total daily intake isn’t hazardous to heart health and may indeed provide a protective effect against heart disease. It is worth noting that many fat-free or low-fat foods are crammed with artificial sugars and sweeteners and therefore many of us who do go ‘low-fat’ often replace fat with carbohydrates; the consequences of which appear to be an increased risk of heart disease as well as other uncommunicable diseases such as diabetes and cancers. It goes without saying that we must not over-indulge ourselves with saturated fat, but eating less dietary carbohydrate (particularly those with a high-glycemic index), trans-fatty acids and linoleic acid, while increasing the consumption of fish, red meat, vegetables and fruit may be an attractive means of keeping our heart healthy.

‘Our genes should be well adapted to eating ~15% saturated fat – 2 x that recommended as maximum by USDA, yet as much as the healthiest populations in Europe’ Coincidence?

Bio: Scott is a Doctoral Researcher in Exercise Metabolism at the University of Birmingham, UK. He holds a First Class Honours degree in Sports Science and a Masters with Distinction in Sports Physiology. He currently works as a Nutrition advisor for Myprotein UK who are the UK’s number one online sports nutrition company. For regular updates on the latest in exercise metabolism and nutrition, follow Scott on Twitter @scottrobinson8 or if you have any questions please feel free to email him slr247@bham.ac.uk