SNI:  It is commonly heard among fitness professionals (i.e. personal trainers) that overweight or fat individuals complain of having a ‘slow metabolism.’ How often is a ‘slow metabolism’ (e.g. thyroid dysfunction, nervous system disorders) to blame for being overweight versus merely eating too much and moving too little?

Darcy: Studies show that individuals who are overweight or obese have a higher resting metabolic rate than normal weight individuals, due to the increased energy costs of supporting the basal functions of a larger body mass.  Once normalized for body weight however, there are usually no differences in metabolic rate between lean and obese people.  That being said, a study done in a population of Pima Indians in the late 1980’s showed that a lower 24-hour expenditure (measured in a metabolic chamber) significantly predicted weight gain over the next 2 years, and furthermore 24-hr energy expenditure tended to be similar among siblings.  Whether this is true for a larger population is unknown, as metabolic rate is not usually measured prior to becoming obese.  The similarity in metabolism among siblings does suggest a genetic influence on resting metabolic rate.  There is also some evidence for subclinical hypothyroidism in obese individuals that may be contributing to weight gain and this is a current area of research interest.  However, restricting calories and moving more can overcome these pre-dispositions; i.e., the effects of a healthy lifestyle are stronger than the genetic influences.

SNI: In your paper published in JCEM, you discovered that despite the preservation of fat-free mass in severely obese people, exercise did NOT prevent the dramatic drop in metabolic rate after severe weight loss. Why is that? We’ve been told that if you preserve muscle or LBM, that metabolic rate should stay high.

Darcy: We were surprised by this finding as well.  We thought that since these individuals maintained a lot of their lean mass, their metabolic rate would stay higher.  But it fell dramatically, despite the lean mass maintenance.  This is probably due to the enormity of the weight loss and the rapid rate at which it occurred.  The body ‘adapted’ to try to conserve energy.  For example, we found that T3 (the active thyroid hormone) levels were significantly reduced, as was leptin.  These hormonal changes would cause the muscle to conserve energy.  Although we did not measure it, I suspect that mitochondrial activity within the muscle became much more efficient as well.  In other words, muscle metabolism probably slowed along with the weight loss.

Darcy: Yes, theoretically with all other things being the same, a gain in lean mass would cause an increase in metabolic rate.  The amount of increase would depend on the amount of muscle gained.  It is difficult to tease out just the contribution of skeletal muscle to metabolic rate, because the human body is so dynamic – other lean masses are changing too (internal organs, which have a MUCH higher metabolic rate than muscle).  Likewise, if fat mass is lost, metabolic rate will drop some, and if a lot of muscle is gained, there is probably some increase in fat too.  To answer your last question, you would have to ensure that ONLY skeletal muscle was changing – no fluid changes, no loss or gain of fat mass, and no change in organ function, and still an exact number would be impossible, as mitochondrial activity and muscle metabolism is highly variable among individuals.

SNI: What advice would you give to someone 50 years of age and older with regards to maintaining a lean physique? 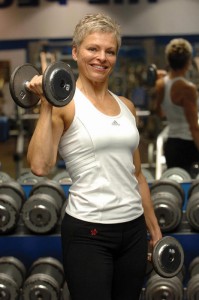 Darcy: First, I would advise them to carefully watch their diet in order to maintain a healthy body weight.  Metabolism naturally slows with aging (although we are not sure why) and it is more difficult to lose weight once your metabolism slows.  Restrict calories if some weight loss is needed.  Then, adding an exercise regimen is important.  Not particularly for weight loss, but to maintain a healthy weight and also to maintain muscle mass, which we know declines with aging.

Darcy: Weight cycling can be very detrimental to one’s health.  Many adaptations occur during weight loss.  Fat mass is reduced but so is lean muscle mass.  Metabolic rate drops.  Hormone concentrations change.  All of the changes occur in effort to conserve energy, a very important process during times when energy (food) was scarce.  There is recent evidence that suggests that these adaptations persist beyond the immediate weight loss phase, that is, you do not come back to ‘baseline’.  This increases the risk for weight re-gain, and unfortunately, the same adaptive responses are not as strong during weight gain.  In other words, your body does not defend against weight gain like it does for weight loss.  After the weight re-gain, it is probably more difficult to get the weight off because your metabolism did not completely return to normal after the initial weight loss, and you would likely have to restrict calories even more or add extra exercise in order to create the necessary energy deficit.

I completed my Bachelor’s and Master’s of Science degrees in Human Nutrition from South Dakota State University. I completed a clinical dietetics internship at Hurley Medical Center in Flint, MI. I then worked as a clinical dietitian for several years before obtaining my PhD in Nutritional Sciences from Iowa State University. For my dissertation work I studied protein metabolism in elderly subjects and also investigated postural allocation and components of energy expenditure in lean and obese women. I then went on to do a postdoctoral fellowship under the guidance of Dr. Eric Ravussin, where I focused on energy metabolism in aging and obesity. Currently I am an Assistant Professor of Skeletal Muscle Physiology. My studies center on how mitochondrial function changes with weight gain or loss and during aging, and how these changes influence energy metabolism.