Editor’s Note:  A GREAT resource for sports nutrition and supplement information is Examine.com (Thanks to Kurtis Frank and Sol Orwell [not to be confused with George Orwell).

You’ll find easy to follow and concise summaries of many of the major categories.  It’s perfect if you’re a lazy a@@ and don’t feel like doing searches on pubmed.  jk

Here’s an update on one of our favorite fatty acids

Arachidonic acid is the most physiologically relevant omega-6 fatty acid. Produced at the end of linoleic-acid metabolism, arachidonic acid is a polyunsaturated fat that is deposited in the membrane of cells. Upon stimulation of the cell by stressors (physical stress, oxidative stress, inflammatory cytokines), arachidonic acid is released by various phospholipase enzymes.

The released arachidonic acid can produce a variety of eicosanoids, which are potent intracellular signaling molecules, including the subclasses of thromboxanes, prostaglandins, and leukotrienes. These eicosanoids have their own receptors to act on, and those receptors mediate the effects of arachidonic acid.

Arachidonic acid is in a unique and odd position. First, it is very well studied by virtue of being an essential fatty acid. In the past, however, epidemiological research suggested that arachidonic acid may be a contributing factor in the association between meat products and health conditions (although more recent evidence for the association is inconclusive), and the popularity that fish oil has achieved has also painted arachidonic acid in a negative light since they are antagonistic to one another in many respects (where the omega 3:6 ratio matters).

Arachidonic acid has become more popular lately due to its supposed muscle-building potential. One of the eicosanoids known as prostaglandin 2 F alpha (PGF2a) is able to induce muscle protein synthesis by acting on the PGF2a receptor, and injections of this prostaglandin are sometimes (illegally) used in the form of Dinoprost to promote muscle growth.

It is thought that with more arachidonic acid in the cell membrane, when the muscle cell is stressed (which occurs with the stretch reflex of skeletal muscle) a greater percentage of arachidonic acid is released and subsequently more PGF2a is produced.

Another prostaglandin, called PGE2, also promotes muscle growth, but works via different receptors and appears to be a tad weaker; it goes by the name Dinoprostone.

There is currently not enough evidence to say what supplementation of arachidonic acid actually does, but due to the large body of evidence on fish oil (and correlating benefits to the omega 3:6 ratio) and studies manipulating both the arachidonic acid content of the diets and the ratio of omega 3:6, we can make a few very reasonable guesses. 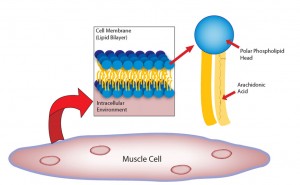 Arachidonic acid appears to be more immunosupportive/pro-inflammatory than fish oil. This can be beneficial from a muscle-building perspective (as the inflammatory signaling cascade after a workout plays a role in muscle protein synthesis) but may also aggravate inflammatory conditions; particularly those that respond well to fish-oil supplementation.

The eicosanoids produced from omega-6 also appear to be more prone to inducing muscle protein synthesis than do eicosanoids from fish oil.

○     Anything it may theoretically help with?

○     Who would benefit from supplementing?

Assuming the science starts to take a positive turn in the next few years, then arachidonic acid would likely be useful for young athletes who want to build muscle mass and do not mind additional muscle soreness. Furthermore, a lack of inflammatory disorders or joint pain might be required prior to supplementing to minimize theoretical side effects.

Currently, 1,000 mg of arachidonic acid has been used daily in humans. There is no evidence to suggest whether this is the optimal dosage, and given how supplementation involves an omega-6 fatty acid and the cell membrane the optimal dose is likely related to the overall dietary ratios of omega-3 to omega-6.

There currently is not enough evidence to suggest when the best time of day to supplement this compound is. If the benefits rely on the omega 3:6 ratio, it is not likely to be dependent on timing.

○     What condition (aka fasting)

Although there is not enough evidence to suggest when to take this compound, it might be prudent to take it with a meal. It is unlikely that this is an absolute requirement (it is fat-soluble, but since it is also a dietary fat itself it can be absorbed via chylomicron formation) but pharmacokinetic studies have not yet been conducted.

Arachidonic acid appears to be present in animal products, including skeletal muscle (both the meat and the gristle, including in fish) and in egg yolks. Although not as good a source, there is also some in milk (including human breast milk).

Arachidonic acid can potentially have its benefits hindered by supplemental fish oil, as the fish oil fatty acids (EPA and DHA) will compete with arachidonic acid for placement in the cellular membrane.